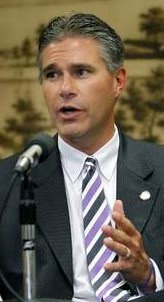 Van Hollen’s spokeswoman, Dana Brueck, said in an email to The Associated Press that Van Hollen has always believed the case will be decided in the that court. U.S. District Judge Barbra Crabb struck down the ban as unconstitutional in June. Hundreds of gay couples married in the week between her decision and her order staying the ruling pending appeal. Van Hollen asked the 7th Circuit Court of Appeals to reverse Crabb but the court refused on Thursday, saying the ban violates the U.S. Constitution. Brueck says the stay remains in place until all appeals are exhausted.