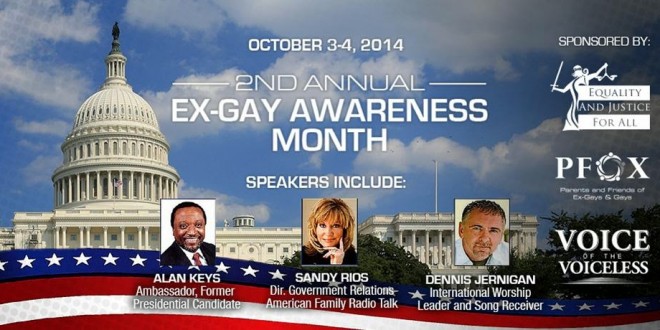 Last year’s big “ex-gay” event was a hilarious disaster in which fewer than ten people showed up after American Family Association radio shrieker Sandy Rios had predicted it would draw “thousands of ex-gays.” That failure came after they had canceled “Ex-Gay Pride Month” due to “anti-ex-gay extremism.” Several weeks later a massive crowd of tens attended an “Ex-Gay Awareness Dinner” held at a secret bunker deep under Washington DC. This time, the media is invited.

Voice of the Voiceless (VoV) is pleased to extend press credentials for media outlets wishing to cover the 2014 Ex-Gay Awareness Conference, October 3-4, in Washington, D.C. The conference is being co-hosted by Parents and Friends of Ex-Gays and Gays (PFOX) and Equality And Justice For All (E&JA). Sponsors of the conference include: Family Research Council, American Family Association, Liberty Counsel, Defend Life, The Alliance for Scientific Integrity and Therapeutic Choice, PFOX, VoV, E&JA, and more. A conference and celebration on October 4th featuring former US Ambassador Alan Keyes as the keynote speaker will highlight the many achievements of ex-gays, including Christian singer/songwriter Dennis Jernigan, who will receive the 2014 Courage Award for Former Homosexuals. Other speakers include Matt Barber, Vice President of Liberty Counsel, Peter Sprigg of the Family Research Council, and a special appearance by American Family Radio personality and former Fox News contributor, Sandy Rios, who will accept the 2014 Friend of Ex-Gays Freedom Award.

Recapping the speakers, we can presume that Matt Barber will let everybody know that non-ex-gays deserve to die of AIDS, Peter Sprigg will call for non-ex-gays to be imprisoned, and Sandy Rios will declare that non-ex-gays are possessed by demons. Awards for everybody!