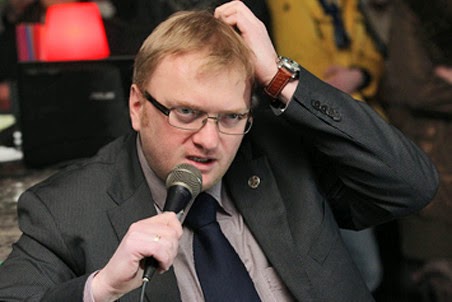 Accompanied by local lawmaker Vitaly Milonov, anti-gay thugs from the Russian Orthodox Church swarmed yesterday’s opening of the  St. Petersburg QueerFest where 16 attendees were reportedly hospitalized after an unknown gas was released.

St. Petersburg lawmaker Vitaly Milonov, his aide Anatoly Artyukh, and activists who associate themselves with the Russian Orthodox faith interrupted the opening ceremony of the “KviroFest-2014” event at a cafe on September 18. The visitors splashed an indelible green antiseptic on participants and released an unidentified gas that sickened many. The 10-day festival opened despite the attack. Russia decriminalized homosexual relations after the 1991 Soviet collapse, but such harassment is common. Rights defenders and Western governments including the United States say a 2013 law banning the dissemination of gay “propaganda” to minors is discriminatory and encourages ill-treatment of LGBT people.

LGBTI organization Coming Out St Petersburg, as well as 40 other volunteers, had worked tirelesly for five months to ensure the arts event was a success. But an hour and a half before the opening, Polina Andrianova told Gay Star News they were forced to move to a different venue. She alleged the owner of the building had forced the space to break the contract, and the Coming Out group had to change the venue, installations, sound equipment and direct all the guests to another space. But the anti-gay thugs found them. “There were 20 aggressors, and the security guys that we hired blocked them from entering,’ Andrianova told GSN. “They proceeded to spray the doors – two entrances – with this horrific green stuff. They also sprayed some form of gas – it left a really bad, putrid scent. Today we learned 16 people were hospitalized today from breathing this thing in.” Andrianova believes Milonov may have left immediately before the lawbreaking began. But she says the deputy of St Petersburg comes to all of their events, any street rally, to try and shut them down. “He seems to enjoy the PR.”

GLAAD has more and photos of the event prior to the melee.

Vitaly Milonov and fellow anti-LGBT activists, who proceeded to insult and push guests, representatives of human rights organizations and European and the US diplomatic missions in St. Petersburg spoke of the importance of respect for human rights and non-violence. About 20 hooligans sprayed guests with green substance and some sort of putrid gas. At one point, two foreign guests were being pulled into the venue by the security while being pulled out by their feet by the perpetrators. The police, who carried themselves professionally, were taking numerous statements by the victims, while St. Petersburg ombudsman urged more people to document violations. Unfortunately, the second venue also ceded to pressures, and most events are now homeless. But the organizers remain optimistic.