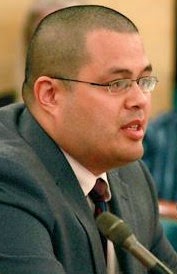 Robert Oscar Lopez: The Human Rights Campaign Is Like The Khmer Rouge

“They’re after your kids, plain and simple; all their other issues are mere window dressing. They have convinced themselves that gays are a tribe unto themselves, so their consuming goal is to populate the tribe so they don’t disappear. Parenthood is their great white whale. They want to have children to love them and call them Mom and Dad. They need to get those children from you because biology prevents them from siring them naturally. Gentlemen readers, these folks are trying to find a way to get the sperm out of your testicles and into their laboratories; lady readers, these folks need to find a way to implant an embryo of their sperm in your womb, keep you obedient during the gestation, and take your baby away forever.

“The main item on the gay lobby’s agenda is patently insane. People don’t generally want to let lesbians milk sperm out of their testicles. People don’t usually like the idea of gay men gestating babies in their wombs and then taking them away. (And no, ‘visitation’ plans where these gamete donors get to see their progeny a few times a month are not a good arrangement; that stuff’s really creepy.) [snip] According to some historians of the so-called killing fields, in the 1970s, the Khmer Rouge hunted down people with eyeglasses and killed them en masse. They did this ostensibly because they worried that people who were too intelligent might challenge the draconian policies of the government. Fortunately, the Human Rights Campaign has no killing fields, so I and my contact lenses are safe for now. God grant that the awakening of reason come earlier rather than later.” – Robert Oscar Lopez, writing about the HRC’s Export Of Hate report for American Thinker.

RELATED: Five days ago Lopez wrote this: “I will say nothing more about the Human Rights Campaign and its hit lists. I have things to do.” He must have run out of things to do.

PREVIOUSLY ON JMG: Last week Lopez petitioned the Fifth Circuit Court of Appeals to stop gay marriage in Texas because he used to be a prostitute. In April 2014 Lopez filed an anti-gay amicus brief
in support of Virginia’s ban on same-sex marriage. Last March 2014
Lopez declared that gay men are turning surrogate mothers into breeding slaves.
Last year, in addition to appearing on stage at an anti-gay Manif Pour
Tous rally in France that was supported by neo-Nazis, Lopez testified
against LGBT equality before several state legislatures and he
co-signed an anti-gay homocon brief to the Supreme Court in support of
DOMA. You really must read the Media Matters take on Lopez’ trilogy of gay erotica.