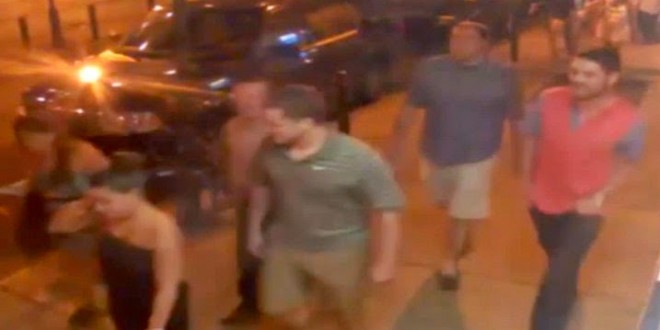 Philadelphia police have released surveillance video of the mob suspected in the brutal gay-bashing and robbery of two men, one of whom suffered broken facial bones and has had his jaw wired shut. The police say that 15 people are wanted for questioning in the attack.

The couple, who wanted to remain anonymous, say the ordeal began Thursday around 10:45 p.m. as they were walking to a pizza shop. The 28 and 26-year-old men were on 16th and Chancellor streets when they say they were approached by a group made up of about a dozen men and women. The victims say someone in the group asked whether they were a couple. When they told them yes, the group allegedly began to attack them, punching and kicking them in the face, head and chest. Police say one of the suspects then snatched a victim’s bag containing a cellphone, wallet and credit cards. The group then fled in an unknown direction. “Three guys were on me taking turns on me,” said the 26-year-old victim. The men say their attackers, who appeared to be drunk, screamed homophobic slurs at them during the assault. “I had three, four guys on me. I turned around and saw his(my boyfriend’s) head hit the ground, like hard,” said the 28-year-old victim. “I was horrified. I thought he was dead.”

It appears that the main suspect is the guy in the center. Philadelphia detectives are soliciting tips at their official blog. With a group this large, I predict that at least one of them will be jilted by another one, get drunk, and drop a dime on the lot of them.