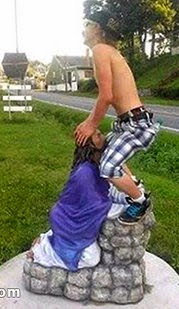 Remember the teenager in Pennsylvania who faces two years in juvenile detention for posing on a statue of Jesus? This happened this weekend:

A successful protest, where several dozen people rallied in favor of free speech, was marred on Saturday, when a belligerent group of counter protesters, including two from what appeared to be a motorcycle gang, crashed the demonstration and threatened those in attendance, including a 14-year old boy arrested for “desecrating” a Jesus statue and Truth Wins Out’s Executive Director Wayne Besen. Incredibly, there was not a single police officer on-hand to prevent potential violence and this left the protesters vulnerable to thugs and forced them to fend for themselves. “The Bedford police placed us directly in harms way and their inaction nearly caused a full-blown melee,” said Truth Wins Out’s Executive Director Wayne Besen. “This is the first time in two decades of protesting that I’ve been put directly in harm’s way by town officials. We call on Bedford to immediately review its policies for protecting the free speech rights of those who demonstrate in their town.”

From the clip recap:

Truth Wins Out Executive Director Wayne Besen, American Atheists President David Silverman and Pennsylvania Nonbelievers President Brian Fields all three organizations came together, held a press conference and a demonstration in Bedford, Pennsylvania, to speak out for freedom of speech and freedom of religion for all after hearing of a fourteen year old child is being tried in juvenile court in Bedford on October 3 2014 for “desecrating” a Jesus statue after pictures were posted on Facebook.

Things start to get heated around the 8:00 mark.