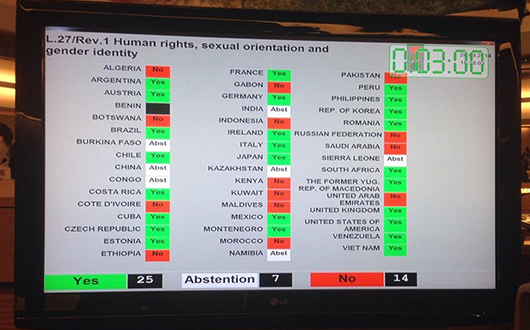 “The Human Rights Council has taken a fundamental step forward by reaffirming one of the United Nations’ key principles—that everyone is equal in dignity and rights,” said Jessica Stern, executive director of IGLHRC. “This resolution puts the UN on a trajectory to address the discrimination and violence LGBT persons suffer daily across the world.”

“The council is confirming that LGBT people have universal human rights,” said Stern. “We know, of course, that the struggle is long, and that we will need the Council to focus on the violations we suffer for many years to come. But for now, we celebrate that the majority of States stood with us to declare, unequivocally, that human rights are for everyone, everywhere.”

The Human Rights Council resolution—led by Brazil, Chile, Colombia, and Uruguay—followed a resolution in 2011 on the same topic led by South Africa and asks the UN Office of the High Commissioner of Human Rights to gather and publish information on how best to overcome discrimination and violence.

Opponents of the resolution employed procedural tactics to defeat the text, by presenting a total of 7 amendments that would have eliminated all reference to sexual orientation and gender identity from the text, and made it applicable only to countries who proactively declare support for sexual diversity and rights. These amendments were defeated by vote. The resolution passed by 25 votes in favor, 14 against, and 7 abstentions.

The United States applauds today’s adoption by the UN Human Rights Council of a resolution in support of the human rights of lesbian, gay, bisexual and transgender (LGBT) persons. The second such resolution to be passed by the UN Human Rights Council, today’s resolution reiterates that LGBT persons are entitled to the human rights and fundamental freedoms that are the birthright of all humankind, expresses grave concern regarding acts of violence and discrimination against LGBT persons, and requests the preparation of an important new report on preventing such abuses. We thank sponsors Brazil, Chile, Colombia, and Uruguay for their leadership, and commend the Council for taking another historic step to reinforce the unassailable principle that LGBT rights are human rights.

The proposal’s opponents — led by Egypt and other members of the Organization for Islamic Cooperation — fought determinedly to defeat the proposal, which they framed as a form of cultural imperialism and an attack on Islam. “We feel there is an attempt to impose uniculturality” that “runs counter to religious and cultural practices of some countries,” said Saudi Arabia’s representative during debate. The language “In my opinion, this [resolution] is a human rights violation.” Pakistan’s representative was more explicit: “The wider connotation of the words ‘sexual orientation’ can be destructive and inimical to our Muslim [faith] …and to our youth as a whole,” he said.

But several amendments intended to gut the bill failed, and the final vote suggests the these arguments are losing ground even in the regional blocs that have historically been the most unified in opposing U.N. language supporting LGBT rights. Congo, Sierra Leone, and Namibia broke with most of the rest of the Africa bloc to abstain on the resolution, a kind of soft “yes” vote. Kazakhstan, a member of the Organization for Islamic Cooperation abstained as well. The vote was far more lopsided than when a virtually identical resolution was voted on in 2011, when it passed by a vote of 29 to 19 with three abstentions.