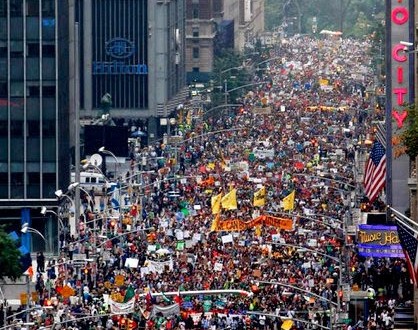 More than 300,000 people marched through the streets of New York City on Sunday in what organizers called the largest climate-change demonstration in history. With banners, flags, floats and drums, protesters at the “People’s Climate March” overwhelmed midtown Manhattan in flocks of vivid color, demanding action ahead of the United Nations Climate Summit this week. “I’m totally passionate about our planet and what’s happening with our life here,” said Heather Snow, 57, a massage therapist from Wilmington, N.C. “The whole Congress, everyone has gone insane, and it’s time to end the insanity. I don’t know how, I don’t know when, but it’s got to happen soon. We’re running out of time.” The massive march kicked off at 11:30 a.m. on the ritzy Upper West Side along Central Park before winding its way through the city on a two-mile route. U.N. Secretary-General Ban Ki Moon, former U.S. vice president Al Gore, New York City Mayor Bill de Blasio, and actors Mark Ruffalo and Leonardo DiCaprio joined thousands of protesters at the march.