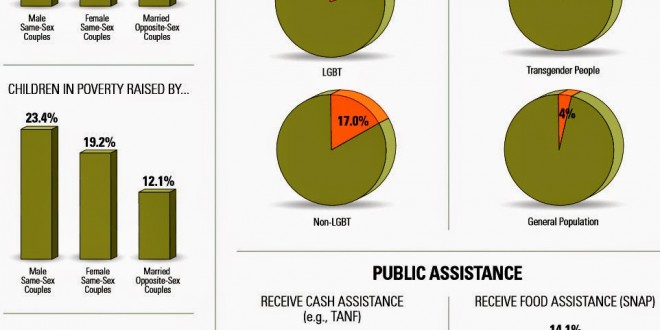 Via the Movement Advancement Project:

A landmark report released today paints a stark picture of the added financial burdens faced by lesbian, gay, bisexual, and transgender (LGBT) Americans because of anti-LGBT laws at the national, state and local levels. According to the report, these laws contribute to significantly higher rates of poverty among LGBT Americans and create unfair financial penalties in the form of higher taxes, reduced wages and Social Security income, increased healthcare costs, and more. The momentum of recent court rulings overturning marriage bans across the country has created the impression that LGBT Americans are on the cusp of achieving full equality from coast-to-coast. But the new report, Paying an Unfair Price: The Financial Penalty for Being LGBT in America, documents how inequitable laws harm the economic well-being of LGBT people in three key ways: by enabling legal discrimination in jobs, housing, credit and other areas; by failing to recognize LGBT families, both in general and across a range of programs and laws designed to help American families; and by creating barriers to safe and affordable education for LGBT students and the children of LGBT parents.

The report documents the often-devastating consequences when the law fails LGBT families. For example, children raised by same-sex parents are almost twice as likely to be poor as children raised by married opposite-sex parents. Additionally, 15 percent of transgender workers have incomes of less than $10,000 per year; among the population as a whole, the comparable figure is just four percent. To demonstrate the connection between anti-LGBT laws and the finances of LGBT Americans and their families, the report outlines how LGBT people living in states with low levels of equality are more likely to be poor, both compared to their non-LGBT neighbors, and compared to their LGBT counterparts in state with high levels of equality. For example, the denial of marriage costs gay and lesbian families money; same-sex couples with children had just $689 less in household income than married opposite-sex couples in states with marriage and relationship recognition for same-sex couples, but had an astounding $8,912 less in household income in states lacking such protections.

Shortly after her wife died in March, Arlene Goldberg had to give up the beloved South Florida home that the couple shared. Because Goldberg’s 2011 marriage to her partner of 47 years wasn’t recognized as legal in Florida, she was denied her wife’s social security benefits. Without that income, Goldberg, 67, couldn’t pay her mortgage. “I’m trying to figure out how I am going to get through this time,” she said from Fort Myers, Florida. “I really can’t even pay my bills.”

Goldberg is among an untold number of LGBT (lesbian, gay, bisexual and transgender) people nationwide who suffer economic distress and in some cases, poverty, as a result of anti-gay laws such as same-sex marriage bans, or from a lack of legal protections, like non-discrimination ordinances, according to a new report by two think tanks, the progressive Center for American Progress and the pro-LGBT Movement Advancement Project.

Census data and other research over the last decade have shown higher rates of financial hardship and poverty among gays. But the report’s authors make the connection between those difficulties and specific laws and policies by analyzing current incomes and poverty rates for LGBT people and their heterosexual counterparts in states that have protections and those that don’t.