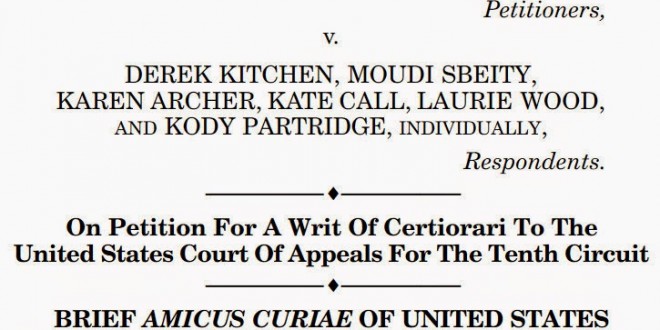 The above-named religious groups have filed an amicus brief asking the Supreme Court to uphold Utah’s ban on same-sex marriage. Via the Associated Press:

The religious groups urged the Supreme Court on the basis of tradition and religious freedom to uphold a state’s right to disallow gay and lesbian couples to wed. “Legal uncertainty is especially burdensome for religious organizations and religious believers increasingly confronted with thorny questions,” the brief says. “Is their right to refrain from participating in, recognizing or facilitating marriages between persons of the same sex, contrary to their religious convictions, adequately shielded by the First Amendment and other legal protections? Or is further legislation needed to guard religious liberties in these and other sensitive areas?” Last month, attorneys for three Utah gay and lesbian couples formally asked the U.S. Supreme Court to take Utah’s appeal of a favorable gay marriage ruling.

The brief is relatively short. Equality Case Files has the full filing.