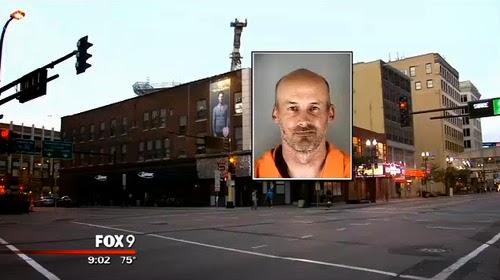 Two tourists visiting the popular Minneapolis gay bar The Saloon were shot with a BB gun on Thursday by a man shouting bible verses.

“He made a disrespectful comment towards the homosexual community, towards a couple that was holding hands and he obviously didn’t appreciate that,” [security guard Tyler] Erickson said. Shortly after his expletives, Odegard’s sheer disregard for the establishment, or humanity, then escalated. After yelling gay slurs, he allegedly pulled out a CO2 powered BB gun. “I ran after him and then it ended up he shot a different gay couple in the leg, with that gun and it went through his jeans and drew blood,” Erickson said. Before Odegard could run even 30 feet, Erickson nabbed him, arrested him and called police. “He told me multiple times that I’m going to go to hell and he’s going to bring me with him,” Erickson said. “He recited a biblical passage — I think it’s a Deuteronomy passage.” Fortunately, they couple wasn’t seriously injured. It wasn’t a real gun, but the act shouldn’t be taken lightly, Erickson said. “Even if the guy was shot with the same CO2 powered BB gun in the face, it would’ve gone right through his cheek.