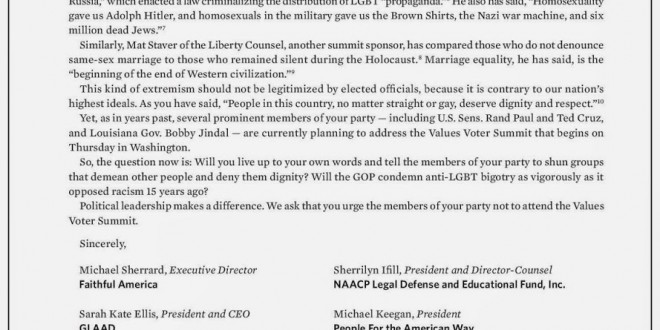 A coalition of LGBT and civil rights groups today published a full-page ad in the Washington Post, demanding that the GOP denounce this weekend’s Family Research Council Values Voter Summit. Here is the text in full:

Dear Mr. Priebus, Fifteen years ago, your predecessor called for party members to shun the Council of Conservative Citizens because of the group’s “racist views.” “A member of the party of Lincoln should not belong to such an organization,” GOP Chairman Jim Nicholson said. His comments had their intended effect: Senior members of Congress distanced themselves from the group. Today, Chairman Priebus, we ask that you take a similar stand and call upon Republican officials to disassociate themselves from the groups behind the upcoming Values Voter Summit.

The reason is simple: These groups engage in repeated, groundless demonization of LGBT people — portraying them as sick, vile, incestuous, violent, perverted, and a danger to the nation. The Family Research Council, the summit’s host, is vigorously opposed to extending equal rights to the LGBT community. Its president, Tony Perkins, has repeatedly claimed that pedophilia is a “homosexual problem.” He has called the “It Gets Better” campaign — designed to give LGBT students hope for a better tomorrow — “disgusting” and a “concerted effort” to “recruit” children into the gay “lifestyle.” He has condemned the National Republican Congressional Committee for supporting three openly gay candidates.

Bryan Fischer of the American Family Association, a summit sponsor, has said the U.S. needs to “be more like Russia,” which enacted a law criminalizing the distribution of LGBT “propaganda.” He has also said, “Homosexuality gave us Adolph Hitler, and homosexuals in the military gave us the Brown Shirts, the Nazi war machine, and six million dead Jews.” Similarly, Mat Staver of the Liberty Counsel, another summit sponsor, has compared those who do not denounce same-sex marriage to those who remained silent during the Holocaust. Marriage equality, he has said, is the “beginning of the end of Western civilization.”

This kind of extremism should not be legitimized by elected officials, because it is contrary to our nation’s highest ideals. As you have said, “People in this country, no matter straight or gay, deserve dignity and respect.” Yet, as in years past, several prominent members of your party — including U.S. Sens. Rand Paul and Ted Cruz, and Louisiana Gov. Bobby Jindal — are currently planning to address the Values Voter Summit that begins on Thursday in Washington. So, the question now is: Will you live up to your own words and tell the members of your party to shun groups that demean other people and deny them dignity? Will the GOP condemn anti-LGBT bigotry as vigorously as it opposed racism 15 years ago? Political leadership makes a difference. We ask that you urge the members of your party not to attend the Values Voter Summit.

The letter is signed by the heads of GLAAD, the HRC, the SPLC, the NAACP, Faithful America, and People For The American Way. Embiggen the image above to see the letter.

Previous A Londoner On The New York Subway
Next Ann Romney On Mitt 2016: We’ll See