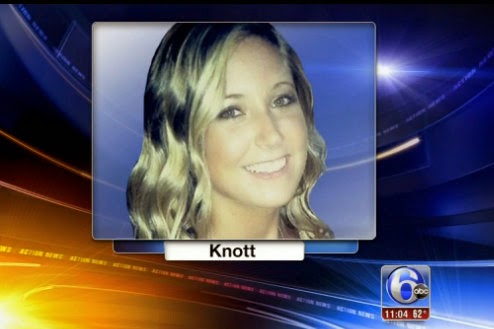 The lawyer for alleged Philadelphia gay-basher Kathryn Knott appeared on right-wing AM talk radio today to declare, unsurprisingly, that his client is completely innocent. An excerpt:

“She completely denies having touched anyone and she maintains that that just simply didn’t occur and that those who are making the accusations are incorrect. She was walking with a group of friends. Unfortunately, there was an altercation between two males, of which, she was not a part of. That altercation got out of control. Unfortunately, one gentleman was injured, but he wasn’t injured because of the conduct of Ms. Knott. This is a woman who grew up in a law enforcement environment, in a law enforcement home. She has the utmost respect for the law. She is a gentle, kind person who was never in trouble before. She has zero animus to anybody, let alone somebody of a particular group or persuasion. This young woman, on her best day, couldn’t bust a grape. She hurt no one. She struck no one. Simply stated, she didn’t do this.”

The show’s host and the lawyer both talk about being offended that Catholics like them are being stereotyped as bigoted. The lawyer added that Knott should be free on bail later today. Hit the link and listen to the full interview.