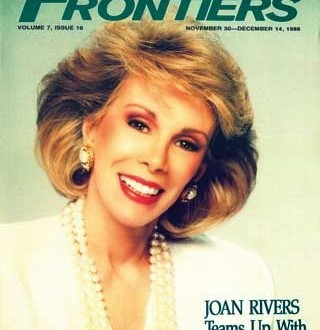 From Karen Ocamb at Frontiers Magazine: “Joan Rivers was not only pro-gay – she was out in front raising money for people with AIDS very early on – when many were still terrified of the disease. She was featured on the cover of Frontiers Magazine promoting an AIDS fundraiser at Studio One in March 1984 that raised $45,000 for APLA, L.A. Shanti and Aid for AIDS.”

Here in New York City, for many years Rivers was a volunteer for God’s Love We Deliver, which provides meals to homebound HIV/AIDS patients. While some of us, myself included, have taken great issue with unfortunate comments made by Joan Rivers in recent months, her decades-long dedication to people living with HIV/AIDS must not be forgotten.