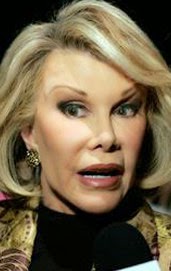 Joan Rivers, a pioneering female stand-up comic and the queen of “Can We Talk?” gossip, has died. She was 81. Rivers was undergoing surgery on her vocal cords at a clinic in New York City on Aug. 28 when she stopped breathing and had to be transported to Mount Sinai Hospital. Her daughter, Melissa Rivers, and her 13-year-old grandson, Cooper, who lived with her in Malibu, Calif., rushed to her bedside. Raspy-voiced and brassy, Rivers was always self-deprecating, foul-mouthed and politically incorrect. A master of reinvention, she endured in show business because of her tenacious work ethic — which she credited to her “immigrant mentality.” Comedians typically push the envelope, but Rivers proved time and again that she didn’t even see the envelope. To her fans, she was as shocking as she was endearing.

Rivers’ family is reportedly considered suing the clinic for placing an elderly person under outpatient anesthesia.