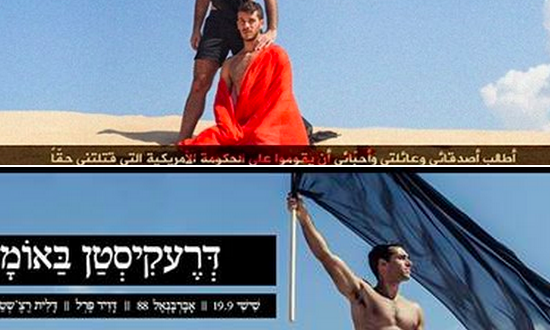 An Israeli gay party promoter has published posters featuring a stark parody of ISIS beheading videos. Drek, which puts together events in famously gay-friendly Tel Aviv, apologized for the use of the homoerotic humor drawing on the gruesome murders of James Foley, Steven Sotloff and David Haines, but also defended the posters. “Our way to express our contempt and criticism to things that take place in the reality in the past four years is through humor and satire,” the event organizers said in a Facebook post. “We think our enemies victory will be when we live in fear and let them control our thoughts. We feel that humor takes the sting out of threatening and offensive issues. If our publications of our last party hurt the feeling of somebody, we apologize.” Nevertheless, most commenting on the organization’s Facebook page were supportive. “In my eyes the invitation is genius and smart. Satire is mostly a bit extreme and that is fine,” Karam Dadu wrote.

Though a number of people shrugged off the posters as poor taste, most were enraged: “Disgusting! Getting a laugh off of the murder of innocent victims,” wrote one commentator; “very baaaaaaaaaaad,” wrote another, while a third lamented it “poor satire”. Posting the images online to Drek’s Facebook page, the organizers wrote “as the new Islamic State gains traction in the Middle East, we at Drek have decided to give in to Sharia law and cheer the stubborn Daesh,” using the Arab acronym for the group, and invoking a veiled play on words – “stubborn” in Hebrew can be written as “hard necked”, a reference to the group’s infamous executions. Amiri Kalman, one of the Drek’s founders, said in response: “We are trying to react to current events. We have been doing it for a number of years. But we reject violence in any form and that includes the (execution) videos intended to scare the world.”

The flag in the second image above is reportedly meant to represent the black flag of ISIS.

Previous Richard Blanco – Until We Could
Next World Net Daily: God Wants President Obama To Nuke The Middle East