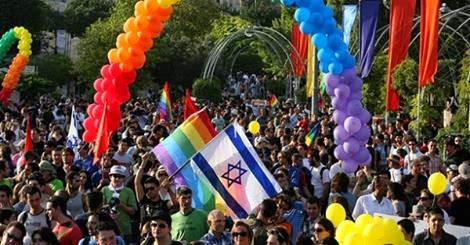 Hundreds of people marched through the Israeli capital yesterday night for Jerusalem Pride despite two delays due to the war in Gaza. Different media reports said 500-2,000 people took part in the 13th edition of the event, although numbers were down on previous years when several thousand people attended. The event is usually held in July but had to be postponed twice because of fighting in the Gaza strip. A large police force escorted the marchers because previous events have been protested by ultra-Orthodox groups, but there were no incidents this year. Jerusalem Pride is smaller and more political than the more exuberant event in Tel Aviv, which was attended by more than 100,000 people in June. Noa Luzzati, an 18-year-old lesbian from the city of Modi’in, told the Jerusalem Post, ‘Here people don’t accept gay people as they do in Tel Aviv. ‘One of the reasons is that the government is based here and many of the religious people are homophobic. So I don’t feel safe here.’

RELATED: In 2011 and 2012 ultra-Orthodox protesters paraded donkeys near the Jerusalem Pride parade route to denounce the “bestiality” of the event. In earlier years ultra-Orthodox rabbis placed a curse on the parade, calling for its participants to feel “heavenly judgment.”