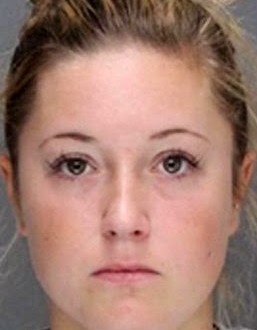 The daughter of a Pennsylvania police chief, facing assault charges, was fired today from her hospital job after allegedly posting photos and information about patients that potentially violate privacy policies. Lansdale Hospital-Abington Health told ABC News,“Effective today, September 25, 2014, Kathryn Knott has been terminated from her employment at Abington Health.” Knott, 24, had initially been suspended her because of charges stemming from her alleged involvement in an attack on two gay men in downtown Philadelphia. Knott, from Southampton, Pennsylvania, had worked at the hospital since 2011 as an emergency room tech. Her Twitter page includes tweets about apparent patients and photos of X-rays. She was arrested this week with two men, Kevin Harrigan, 26, and Phillip Williams, 24, for her alleged role in the Sept. 11 fight. Her lawyer has said she is innocent, but her tweets going back to 2012 are going viral for what she had to say about foreign cab drivers, gay men and Asian people, among others.

A trial date has not yet been set.

Previous New From Freedom To Marry
Next Sen. Ted Cruz: Hold Off On Eric Holder’s Replacement Until New Senate Is Seated