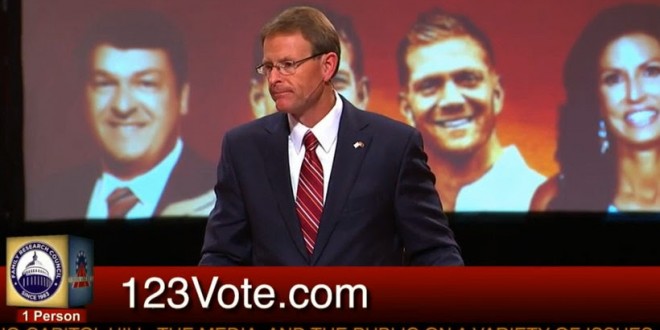 Yesterday the Family Research Council and a cavalcade of anti-gay crackpots held an event that was pitched as a marking of the 200th anniversary of the national anthem. But, of course, the event was really more of a Christian get-out-the-vote rally laden with ominous claims about the end of religious liberty and the “movement to expel God from the public space” in the United States. Speakers included Mike Huckabee, loony E.W. Jackson, Sen. Ted Cruz, the Benham brothers, Penny Nance of the Concernstipated Women, and Pastor Rick Scarborough, who recently called for a class action lawsuit against homosexuality itself. The full clip is below, click around if you can bear it. (The event was two hours long, the clip repeats halfway through.)

UPDATE: The Charlotte Observer reports on the rally.

Two possible GOP presidential candidates joined with prominent leaders of the religious right in Charlotte on Sunday night to mark the 200th anniversary of the poem that became America’s national anthem. The evening of speeches, Bible verses, and music from First Baptist Church in uptown Charlotte was simulcast to 351 conservative evangelical churches across the country. These listeners and the event’s headliners – U.S. Sen. Ted Cruz, R-Texas, and former Gov. Mike Hucakbee, both exploring a 2016 run for the White House – also heard a longer, religion-tinged version of “The Star-Spangled Banner” than those who stand and sing it at baseball games and Fourth of July celebrations. Asked whether “Star Spangled Sunday” amounted to a political rally in a tax-exempt church, Perkins insisted the celebration of Key’s words, written in September 1814 during a battle with the British at Fort McHenry in Baltimore, amounted to an appropriate tribute to the religious heritage that shaped America. “If you look at the history of Francis Scott Key, he was a Christian motivated by his faith,” Perkins said. “If you read the final stanza (of what became ‘The Star-Spangled Banner’) it is, I would say, nothing short of a prayer.”

Previous Uganda Tourism Board: Gays Are Welcome
Next Trump: I Never Went Bankrupt