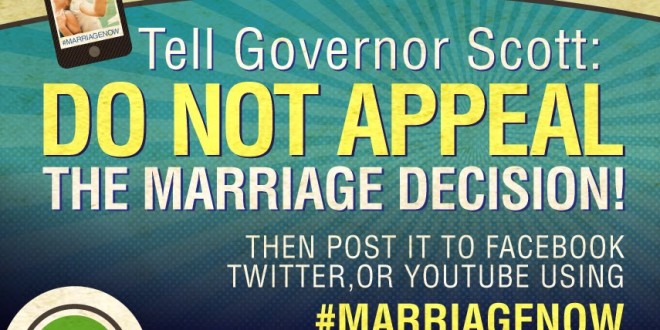 On August 21, Judge Hinkle ruled Florida’s ban on marriage for same-sex couples unconstitutional and added Florida must also recognize legal marriages performed in other states. The judge immediately stayed the ruling pending appeal. But if the decision is not appealed by September 21, the marriage ban will fall on September 22!

Judge Hinkle has stated that Attorney General Pam Bondi cannot appeal the decision. Then who can appeal? Craig J. Nichols, Florida’s Secretary of Management Services; John H. Armstrong, Florida’s Surgeon General; and Harold Bazzel, Washington County Clerk of Court. Two of the three take orders from Governor Scott and will likely appeal the decision if he tells them to do so.