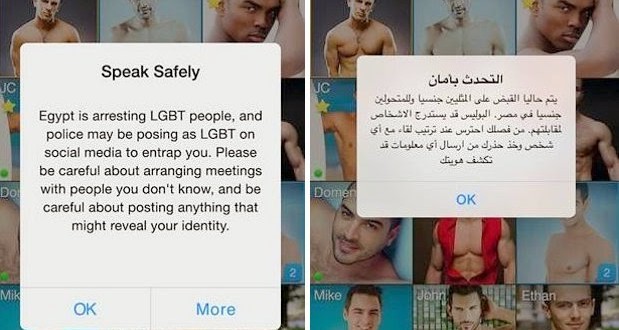 Grindr has issued the above warnings to its users in Egypt. J. Lester Feder reports at Buzzfeed:

Six men were sentenced by an Egyptian court on Thursday to two years in prison with labor for allegedly advertising their apartment on Facebook for men to have sex with each other for a fee of $200 per night, reports the state-owned Egyptian news site Ahram Online based on information from “a judicial source.” This case may be the first case in which Egyptians have been caught on social media for charges of homosexuality, something human rights activists have warned could become widespread as the Egyptian government widens its crackdown on LGBT rights. Since October, around 80 people are known to have been arrested on allegations of homosexuality, including eight men who are due in court on Saturday for appearing in a video that shows a couple of men exchanging rings that made headlines throughout the Arabic press as a “gay wedding.”

Earlier this month Grindr announced that its distance function would not longer be the default feature for users in countries where homosexuality is illegal or dangerous.

Previous Tweet Of The Day – Rep. Brian Sims
Next The Right’s Worst Smears About Holder