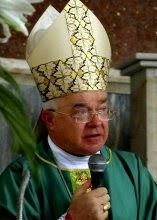 Wesolowski was recalled to the Vatican last year after the local media accused him of hiring rent boys.