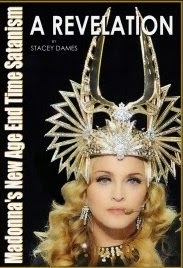 Christian Post: Madonna Is Working To Prepare The World For Satan

“Madonna doesn’t have an ego problem; she has a sin problem. And it’s getting worse. Unrepentant and hardened from sin, no amount of make-up or photo-shop can conceal the evil in her eyes. Ensnaring millions into a web of destruction, Madonna is preparing fans for a specific event. Using biblical discernment concerning the times in which we live, and her own words, Madonna’s agenda becomes clear. Learn the origin behind her deviant obsessions, and uncover the inspiration behind her best-loved songs. The ‘light’ she sings about is the force driving her one-woman empire, and will soon make an unforgettable appearance on earth. Whether you’re a long-time fan, or haven’t paid attention to her in years, Madonna’s deception is finally unmasked. Is she just a pop star, or an agent of Satan? Hidden in plain sight, see what you have been looking at all these years. Truly, in Madonna’s world, nothing is what it seems.” – Stacey Dames, promoting her book for the Christian Post.