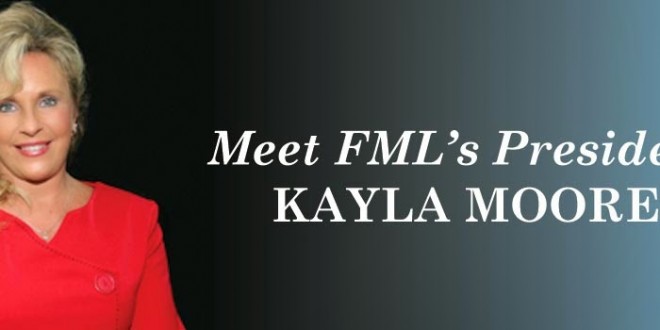 Ginsburg stirred further concern September 16 when she told a Minnesota audience that if the Sixth Circuit rules that states may prohibit same-sex marriage, “there will be some urgency” because that would run contrary to a legal trend favoring gay marriage and force the Supreme Court to step in sooner, but if the Sixth Circuit falls in line with other rulings there will be “no need for us to rush.” Ms. Moore said Justice Ginsburg’s comments were improper because “they not only tip the Court’s hand as to how she will vote, but they also constitute a warning to lower courts that they had better rule in favor of same-sex marriage or the Court will step in and reverse them, and the words ‘no need for us to rush’ imply that she was speaking not only for herself but for the rest of the court. Litigants, lawyers, and the American public can have no confidence in the Court’s impartiality unless Justices Kagan and Ginsburg recuse themselves from same-sex marriage cases.”

Kayla Moore, NOT incidentally, is the wife of Alabama Supreme Court Chief Justice Roy Moore, who was reelected last year after being booted from that job in 2003 for refusing to remove a Ten Commandments monument from the courthouse grounds. Kayla Moore assumed the group’s presidency when its founder, her husband Roy Moore, returned to the bench. Roy Moore has posted the above press release to his Facebook page.

UPDATE: Moore is deleting your comments. Keep him busy tonight!

RELATED: Two weeks ago the Foundation For Moral Law filed a SCOTUS amicus brief on behalf of an evil Alabama mother who does not want her late son’s husband to be able to inherit her son’s estate. The brief was filed by Foundation For Moral Law senior counsel John
Eidsmoe, who has a crackpot history that might exceed that of Roy Moore.
In 2011 Eidsmoe called for Congress to have “ex-gay” torture provided to the US military. That same year he declared that gay service members will molest children. He has also said that all women must submit to their husbands and that the United States must impose biblical laws
and punishments or else the nation is doomed. Eidsmoe, NOT
incidentally, was Michele Bachmann’s professor at Oral Roberts
University.