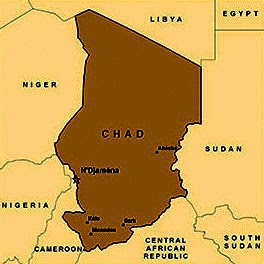 CHAD: Parliament To Get Bill That Calls For 20 Year Sentence For Homosexuality

The national legislature for the central African nation of Chad will soon consider a bill that calls for a 20-year prison sentence for homosexuality, which is presently legal there. Pink News reports:

According to AFP, proposed legislation has already been adopted by the country’s cabinet which would punish gay sex with up to 20 years in prison. It is yet to go before the country’s parliament, but given rising anti-gay sentiment in the nation is expected to pass. Section 361 of the code bans same-sex actual activity for both men and women, and can lead to 15 to 20 years of imprisonment and a fine of 50,000 (£60) to 500,000 CFA francs (£600). The state claims the law was tabled to “protect the family and to comply with Chadian society”. Kerry Kennedy of the US-based Robert F Kennedy Centre for Justice and Human Rights said: “By criminalising homosexuality, Chad’s proposed penal code is an instrument of discrimination, not of justice.”

Chad’s has 10.3M residents. About 55% are Muslims and 40% are Christians. Chad president Idriss Deby, who seized power in a 1990 military coup, is a Muslim. His party is called the Patriotic Salvation Movement.