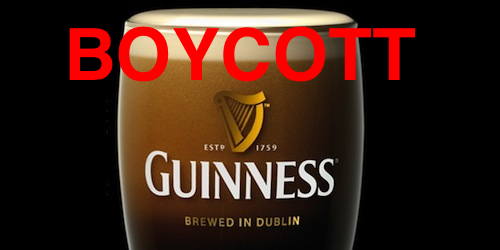 “We are now half-way to St. Patrick’s Day, and many will be tipping a few in anticipation of the March 17, 2015 parades and celebrations. For several reasons, the Guinness boycott must continue. First, we should remember that this corporate bully tried to shove its secular agenda down our throats by punishing the New York City St. Patrick’s Day Parade for not allowing gays to march under their own banners in 2014; it pulled its sponsorship. Its goal, which is supported by its friends at Irish Central, is to sever the religious moorings of the parade. Second, it announced its boycott on the eve of the parade, swindling pub owners to stock up on its stout before pulling the trigger. Third, even though a gay group will be marching in the 2015 New York parade, Guinness is not promising to renew its sponsorship: it wants more homosexual units to march before getting on board again. If it were to succeed, it would turn the parade into a diversity free-for-all, thus eviscerating its Catholic heritage. Guinness has no monopoly on St. Patrick’s Day anyway. It’s time we sent them a message and told them to get lost.” – Bill Donohue, writing for the Catholic League.