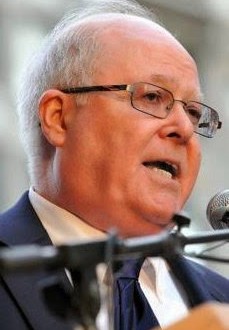 “Here’s the hitch,” Donohue said, about allowing gays to march. “They do have dress requirements and other kinds of strictures. The question is, ‘Will the gays behave?’ Gays have been known to take their clothes off in the parade. They can’t keep their pants on sometimes when they march in the gay pride parade.”
When told that in fact the St. Patrick’s Day Parade gets quite unruly, with reports of drunkenness, violence and police run-ins each year, with heterosexual people certainly not “behaving,” Donohue insisted that they still “keep our pants on,” though he acknowledged he’s never been to Mardi Gras in New Orleans where many heterosexuals certainly engage in sexual expression, sometimes unclothed.
“We keep our pants on,” he said. “You guys have masturbated on the street. I have pictures of what went on in the Stonewall 1994 gay pride parade that you couldn’t put on CNN or publish in The New York Times. Men and women went naked in the street in front of St. Patrick’s Cathedral. I think it is a ‘wow’ when men can’t keep their pants on when they march.”

You’ll recall that Donohue dared NYC Pride to allow the Catholic League to march this year.  When NYC Pride welcomed his participation, Donohue then weaseled out, claiming that the pre-parade safety seminar constituted “forced gay training.” That safety briefing constitutes a short slideshow presentation required of all NYC parades and instructs a representative from each group on how to summon medical aid, how to obey NYPD traffic instructions, etc. Maybe the one gay group being allowed to march in the 2015 St. Patrick’s Day Parade should object to the “forced Catholic training” required before participating.