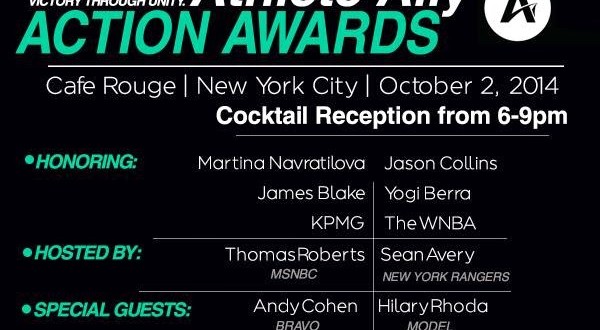 Next week Athlete Ally will hold its inaugural awards gala where baseball legend Yogi Berra will be among the honorees.

The event celebrates the pioneering actions by individuals and organizations in 2014 that helped create LGBT inclusive athletic environments and eliminate anti-LGBT prejudice. This first-of-its-kind event is an unprecedented LGBT-straight alliance embodying the Athlete Ally motto: Victory Through Unity. “I want to thank Athlete Ally for this honor,” said honoree Yogi Berra. “Baseball has always been an important part of my life. It teaches you how to challenge yourself and work as a team. No matter who you are, you should have that chance.” The Yogi Berra Museum & Learning Center and Athlete Ally have partnered on a series of leadership workshops as well as “Allyship,” an exhibit commemorating the athletes throughout history who have helped break barriers and change attitudes in society. The exhibit will be on display at the Action Awards. “I’m glad what Athlete Ally is doing, and proud our Museum & Learning Center teaches kids the same idea: respect the game, respect the other guy,” said Berra. “Back when I played and today, there’s no place for discrimination in sports.”

Berra is considered to be the greatest catcher in the history of baseball and appeared in 21 World Series as a player and manager, 13 times for the winning side. He is perhaps equally well known for his Yogiisms, expressions like, “Nobody goes there anymore, it’s too crowded” and “It ain’t over ’til it’s over.” My favorite was his reference to a hotel: “The towels were so thick, I could hardly close my suitcase.” Tickets to Athlete Ally gala are at the top link.