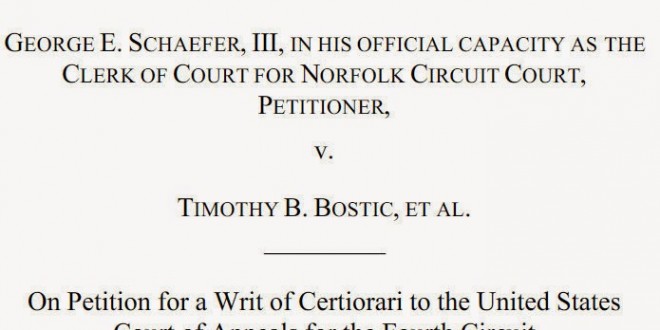 Arguing that lower federal courts have “subverted” the Supreme Court’s decision last year on same-sex marriage, a Virginia court clerk on Friday filed his own petition – the second filing seeking a ruling on the constitutionality of that state’s ban on such marriages and the fourth on the basic constitutional issue. The filing may complicate the Court’s chances of promptly considering that issue.

The new document was filed by lawyers for George E. Schaefer III, who is the circuit court clerk for the city of Norfolk. He has been taking part in the Virginia case since it began, and he is now defending the ban, after state officials opted not to do so. Already pending at the Court are another petition from Virginia, one from Utah, and one from Oklahoma. Another is expected soon from Virginia, to be filed by a different clerk.

On Wednesday, the Court blocked the issuance of licenses for same-sex marriages in Virginia pending the filing of a petition by the other clerk who is defending the ban, Michele B. McQuigg of Prince William County. Her petition is being prepared now by her lawyers, who may file it within the next week or so.

In the other two Virginia filings, one by the state attorney general and now by the Norfolk clerk, each claimed that it was the proper vehicle for the Court to review the validity of the Virginia ban. But the two are on slightly different procedural timetables within the Court, and that will be true as well for the McQuigg petition when it is filed.