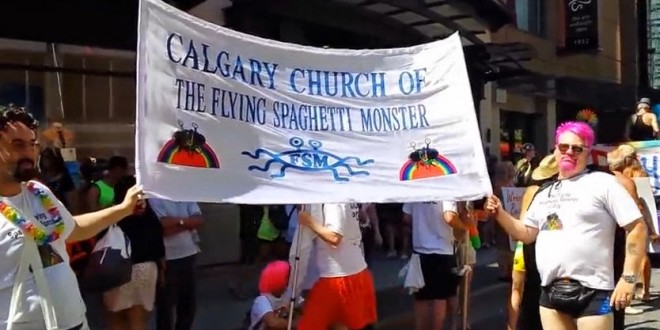 Dear Friends, I am pleased to announce that the Vancouver Gay Pride Committee allowed me to march in this year’s homosexual pride parade and hand out 2500 “Gospel” condoms. Trojan condoms also was kind enough to donate 500 of their not safe enough latex condoms to my contingent, so we used them as a cover for our Gospel condoms that if read correctly and applied properly will guarantee you truly “safe sex” as in life long heterosexual marriage and also eternal life in the world to come. The bags my two activists Darcy and Jonathan are carrying in the video contain life saving and soul redeeming Gospel condoms. Thanks to the generosity of Trojan condoms we were able to cover up our Gospel condoms with a layer of Trojan condoms and avoid detection while we evangelized the entire parade route! While evangelism and the issues of homofascism and where one will spend the rest of eternity are deadly serious issues, we decided that seeing as we purchased our parade permit fair and square and seeing as all the pagans were having fun while rebelling against God, we would have fun too, while evangelizing the parade route and winning souls for the Lord.

According to Whatcott, only one parade-goer opened a fake condom in his group’s presence. When she became visibly upset at the message inside, one of Whatcott’s co-conspirators lied for Jesus and told her that she’d been mistakenly given the condom that he’d been handed by a “homophobe” at the parade. He then gave her one of the real condoms that they had fraudulently obtained from Trojan.

Here’s a portion of the message enclosed in the fake condom:

Dear Homosexual Pride Parade Attendee, If you are attending Vancouver’s ungodly pride parade and have come to receive this literature, I want to let you know I am very pleased God has chosen you to be a recipient of the truth contained in this package. God has a plan for you that is much better than chasing the carnal desires celebrated as something to be proud of in the homosexual pride parade. Homosexuality is portrayed as an immutable, harmless, sexual orientation that is to be accepted and even celebrated. This is a lie. Anatomically everyone is heterosexual. The body is not created for sodomy. The truth is those who give themselves over to homosexuality suffer grievously because of their sin. In spite of billions of dollars being spent fighting sexually transmitted diseases ravaging the homosexual subculture, homosexuals are still suffering and dying from AIDS and other homosexually acquired diseases. In Toronto 23% of self-identified homosexuals admit to being HIV+. AIDS, anal cancer, and Hepatitis B are potentially fatal diseases that are rampant in Vancouver’s homosexual community. Is this something to be proud of?

The message includes a photograph of an emaciated AIDS patient.  Below is a very brief clip from their scam. There are many other photos here.

Previous Pentatonix – We Are Ninjas
Next MINNESOTA: Gay Reporter Grills Archbishop John Nienstedt About His Sexuality And Views On LGBT Rights