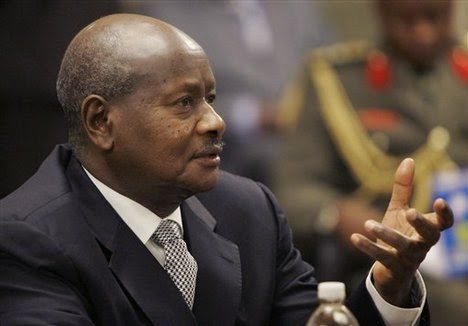 President Yoweri Museveni of Uganda is urging parliamentarians not to rush to reintroduce a controversial anti-gay law that was invalidated earlier this month, saying the measure is not a priority and could hurt the country’s economic development. Museveni, who held a meeting Monday with lawmakers from his party, urged parliamentarians “not to cause chaos” by quickly reintroducing the bill, according to Medard Bitekyerezo, a lawmaker who strongly supports the anti-gay measure. He said Museveni formed a committee, to be chaired by Vice President Edward Kiwanuka Ssekandi, to look into the concerns of rights activists who challenged the constitutionality of the law. The government-controlled New Vision newspaper reported Tuesday that Museveni warned lawmakers that the bill could hurt the country’s economic development. Museveni asked the parliamentarians to debate the law “without any emotional feelings,” the paper reported.

Some Ugandan observers claim that it was Museveni who was secretly behind the bill’s overturn, which came just days before he visited Washington for a summit of African nations held by the US State Department. More than 200 members of the Ugandan Parliament have already signed on to reinstate the bill.

Previous Barber: Gay Marriage Is The “Gateway Drug” To Christians Being Beheaded
Next Breitbart Headline Of The Day