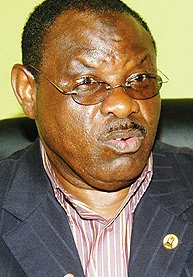 As many had expected they would, Ugandan legislators have launched a campaign to reinstate the brutal Anti-Homosexuality Act, which was struck down last week on a technicality.

It was not immediately clear whether President Museveni would support the bill a second time, if passed by parliament again. “We’re mobilizing members to pledge their support for reintroduction of this bill when the House comes back from recess [in about two weeks’ time],” Abdu Latif Ssebaggala, [PHOTO] told Reuters. Ssebaggala said he had started collecting signatures on Tuesday of members of parliament in favour of reintroducing the bill and that he expected to have over 200 – in a house of 383 members – by the end of Wednesday. Homosexuality is taboo in much of Africa and is illegal in 37 countries there. But the punishments in Uganda were among the harshest.

According to the African news outlet Mail & Guardian, observers claim that Uganda’s president was secretly behind the ruling that struck down the bill.

Observers say that it was a “wily piece of realpolitik” managed by Uganda’s longtime leader amid aid cuts by international donors, allowing him to avoid appearing to cave in to foreign pressure. “This is good news for Museveni, who has been able to say to a lot of supporters: ‘Listen, I did what I could, I stuck my neck out’, while at the same time, potentially allowing for some aid money to return,” said Harry Verhoeven, a doctoral researcher at Oxford University’s department of politics and international relations. The law caused an international outcry when Museveni signed it in February, with the United States secretary of state John Kerry likening it to anti-Semitic legislation in Nazi Germany. Critics said Museveni signed the law to win domestic support ahead of a presidential election scheduled for 2016, which will be his 30th year in power. But it lost him friends abroad, with several international donors freezing or redirecting millions of dollars of government aid, saying the country had violated human rights and democratic principles.

The ruling came just two days before Museveni’s visit to Washington DC for a State Department summit with officials from African nations. A photo of Museveni posing this week with President Obama and the First Lady has outraged some LGBT activists. The photo was posted to the official Flickr account of the State Department.

Previous Rand Paul Waffles On Marriage
Next Ann Coulter: Christians Should Just Let Africans Die Of All Those Horrible Diseases