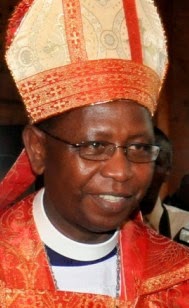 The archbishop of the Anglican Church of Uganda has called on the national legislature to re-approve the brutal Anti-Homosexuality Act, which was struck down last week on a technicality. Via Pink News:

Archbishop Stanley Ntagali said the court’s decision was a disappointment, and that Parliament should rush to restore the law. The ruling effectively killed the law in its current iteration, but there is nothing to stop Parliament from passing a near-identical bill to restore the provisions. He said: “The court of public opinion has clearly indicated its support for the Act, and we urge Parliament to consider voting again on the Bill with the proper quorum in place. “We also hope that Parliament will take this opportunity to make clear the parts of the Bill that were ambiguous and difficult to enforce. “I appeal to all God-fearing people and all Ugandans to remain committed to the support against homosexuality, which is contrary to God’s order, until the law protects our families, the youth and children of our country.”

RELATED: Ugandan President Yoweri Museveni has denied that the court’s ruling had anything to do the suspension of foreign aid by several nations or with his visit to the United States this week for a summit of African nations with the US State Department. Museveni has not yet indicated whether he will push for the bill’s reinstatement.