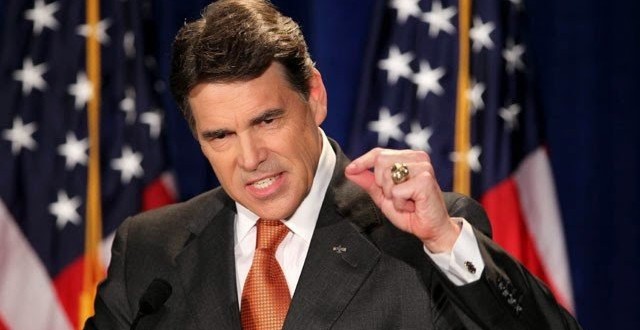 Via the Houston Chronicle:

A grand jury indicted Gov. Rick Perry on two counts of Friday, accusing him of abusing his veto power by threatening to withhold funding from the Travis County’s public corruption unit if the district attorney did not resign following her drunken driving arrest. The Travis County grand jury, led by special prosecutor Mike McCrum, indicted Perry on one count of abuse of official capacity, a first-degree felony, and coercion of a public servant, a third-degree felony. The punishment range for the first count is 5 to 99 years in prison and on the second count, 2 to 10 years in prison,McCrum said.

“I’m ready to go forward,” McCrum said. Asked about the effect on Perry carrying out his duties or eyeing higher office, McCrum said, “I took into account we’re talking about the governor of a state… When it gets down to it, the law is the law.” Grand jurors for months have been looking into whether Perry violated the law last year when he said he’d kill funding for the Travis County district attorney’s public corruption division unless District Attorney Rosemary Lehmberg resigned after a messy drunken-driving arrest.

Perry carried through on the veto threat when Lehmberg stayed on the job. Austin watchdog group Texans for Public Justice filed a complaint with prosecutors last year over Perry’s threat. The group, which tracks money in politics, contended that with the threat, Perry violated laws against coercion of a public servant, abuse of official capacity, official oppression and, potentially, bribery.

The Texas Observer has posted a fascinating dissection of the scandal. Highly recommended to understand the full backstory.