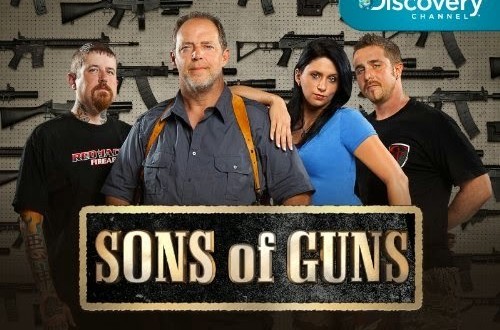 Will Hayden (above center), star of the Discovery Channel’s Sons Of Guns reality show, has been arrested for repeatedly raping his 11 year-old daughter.

The allegations have prompted the cancellation of his Discovery Channel series. “Given the serious and horrific nature of the charges against Will Hayden, we have decided to halt further production of ‘Sons of Guns’ and cancel the series,” the network said in a statement. Hayden is accused of raping a minor “almost daily” since March 2013 and taking her virginity when she was 11 years old. TMZ reports the girl is Hayden’s daughter. During an interview with detectives, the alleged victim said she did not report the sexual abuse because she was afraid Hayden would hurt her. The most recent abuse of the now-12-year-old girl occurred during July 2014, according to the documents. According to police documents, the alleged victim claims that Hayden told her “don’t tell them nothing because I’m all you got.” Hayden was booked on Wednesday and his bail is set at $250,000. There was a warrant out for Hayden’s arrest, and The Times-Picayune reports he was apprehended in Livingston as a fugitive from East Baton Rouge.

Fox news has closed comments on their above-linked article.  Hayden was first arrested on similar charges two weeks ago. He has been a guest on the NRA’s radio show. In the clip below, he pals around with Ted Nugent.