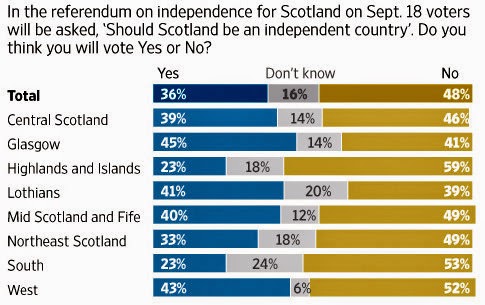 Scotland’s referendum on independence from the United Kingdom is just weeks away and it appears that concerns about the economic impact of secession may have doomed the cause.

Many businesses in Scotland have reservations about independence. Standard Life, a pensions and investments company based in Edinburgh, in May said it had drawn up plans to move operations to England if Scots vote to secede, citing uncertainties over currencies and taxes. On Monday, National Australia Bank Ltd., owner of Scottish lender Clydesdale Bank, said independence might result in significant extra costs and risks for its business there. Nationalists need only a simple majority in the September ballot to end the 1707 union between England and Scotland that followed centuries of antagonism. To many Scots that marriage was a shotgun wedding. A disastrous attempt to establish a colony at Darien on the Isthmus of Panama in the late 17th century left Scotland’s finances in ruins. England demanded the union as the price of a bailout.

RELATED: Yes Scotland claims that Scotland’s membership in the European Union will be “uninterrupted.”

Scotland will remain part of the European Union after independence. As explained in its “independence roadmap” and in its white paper “Scotland’s Future: Your Guide to an Independent Scotland”, the Scottish Government proposes to agree the terms of Scotland’s continued membership of the EU between the date of the referendum, and the proposed date of independence on 24th March 2016. In that way questions relating to our ongoing EU membership can be settled before we become independent. Scotland already is part of the EU – so there is no doubt that we meet all the requirements for membership, and with our energy and fishing resources it is clearly common sense, and in the interests of the EU, that Scotland’s place in the EU continues seamlessly. Even the UK government’s expert European legal adviser has accepted that this timetable is “realistic”. So Scotland’s EU membership will be secure by the time we are independent.