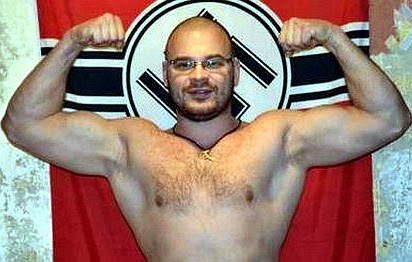 Following his January extradition from Cuba, where he had fled Russian and Ukrainian authorities, notorious gay-basher Maxim Martsinkevich has been sentenced to five years in a Russian prison. Via LGBTQ Nation:

Martsinkevich was convicted of inciting and fomenting cases of extremism by posting videos on the “Vkontakte” (VK.com) social network that contained racial slurs and extremist opinions on Russia’s state of the union, however videos containing anti-gay statements and abuse were not included in the prosecutor’s case against him. Martsinkevich rose to international attention last year when his group began posting videos on VK.com and YouTube, documenting violent and homophobic harassment of men and gay youth the group claims were seeking to have sex with boys. Amid outrage by international Human Rights groups and the prosecutor’s office in what was then Sevastopol, Ukraine (which sought to arrest him for crimes against a young male adult citizen of Ukraine) Martsinkevich fled to Cuba in December 2013, but was arrested and extradited for breaking Cuban immigration law in January. Meanwhile, other members of “Occupy Paedophilia” are currently awaiting trial for their participation in anti-gay crimes. According to the prosecutor’s office in the Kamensk-Uralsky region, a court on August 8 approved the indictment in a criminal case against nine members of the group.