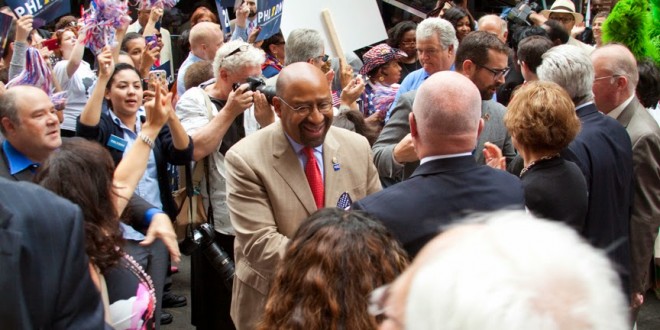 Pennsylvania state Rep. Brian Sims joined Philadelphia Mayor Michael Nutter today in glad-handing the DNC’s 2016 convention team, which was in Brooklyn earlier this week. Sims represents Philly’s Center City, which is home to many of the hotels that would likely host attendees.  Philadelphia and Columbus are considered the leading contenders to win the convention.

Columbus has access to about 26,000 hotel rooms across five counties and 16,000 rooms within the city itself, said Brian Ross, chief executive of the Columbus Convention and Visitors Bureau. With no mass transit options, Columbus officials are looking at using chartered buses to shuttle delegates from their hotel rooms to convention events. Alternative transport options also were being explored, including compact and electric car rentals and the city’s bike-share program. In Philadelphia, about 65% of the hotel rooms required to host the event were within a 15 minute walking distance of the Wells Fargo Center, where the convention would be held, said Kevin Washo, lead strategist for the Philadelphia host committee. Another 3,500 rooms were located across the river in University City, he said. “Brooklyn has 3,500 hotel rooms. We have 3,500 just in our University City location,” he said.

Last week the RNC unanimously selected Cleveland for their 2016 convention.