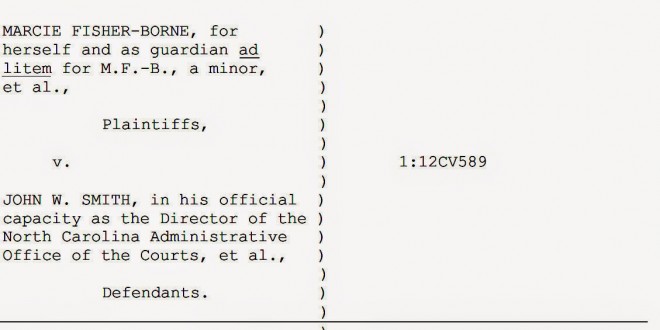 Yesterday a federal court stayed any further action on North Carolina’s same-sex marriage battle until SCOTUS rules on Virginia’s Bostic case. According to the order, should SCOTUS decline to hear Virginia’s case, the stay will be lifted. Also yesterday AFER followed Virginia AG Mark Herring and the Alliance Defending Freedom in asking SCOTUS to hear Bostic.

The North Carolina ruling is here.

“We’re going to let the process work. During that process we ought to have a stay to allow the current law to remain in place, but this is going to the Supreme Court for all the states,” said McCrory. State Attorney General Roy Cooper said he’d no longer support the ban in court after the 4th Circuit Court of Appeals ruled Virginia’s ban unconstitutional. Republican legislative leaders have indicated they may retain outside counsel to represent the state in the existing lawsuits. McCrory said if a court rules the ban unconstitutional, he wants a legal stay put in place pending a final decision. “We should have stay to allow us to implement our current laws up until the Supreme Court decides this.”