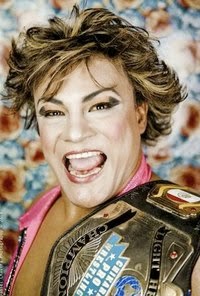 The New Yorker has published a fascinating profile on star Mexican wrestler Cassandro. An excerpt:

At the top of the fun list, for Saúl [Armendáriz], was lucha libre—the flashy, popular Mexican brand of professional wrestling. Every barrio had a small arena where masked heroes (técnicos) and villains (rudos) grappled and whirled and tossed one another around on Sundays. Saúl loved the gaudy costumes. He loved the rowdy, passionate crowds. He idolized the larger-than-life luchadores. He was not a big kid, but he was athletic and quick and in desperate need of an alter ego. “Being gay is a gift from God,” Armendáriz told me recently. That was not his experience as a child. He remembers being brutally punished, at a very young age, for playing patty-cake, a girl’s game, with a like-minded boy at school. His parents, particularly his father, were mortified by his effeminacy. “My dad was a machista,” he said. “He did not want a gay son.” His father, a truck driver, drank; he beat Saúl’s mother. They divorced when Saúl was thirteen. Other kids were also rough. “Boys in the neighborhood, including my own relatives, used me as a sex toy,” he told me. Armendáriz, who is forty-four, stood at a dressing-room mirror in Los Angeles, putting on green-glitter eyeshadow, while recalling these horrors. He did not seem notably detached from, or perturbed by, what he was saying, but somewhere in between. “I am not a victim,” he said firmly. Then he gave a small sigh and started putting on lipstick—fire-engine red. “But I am still so damaged.” He glued on a pair of false eyelashes. He was transforming Saúl into his lucha character, the fabulous world welterweight champion Cassandro.

Previous Wut
Next Exorcism Of The Day