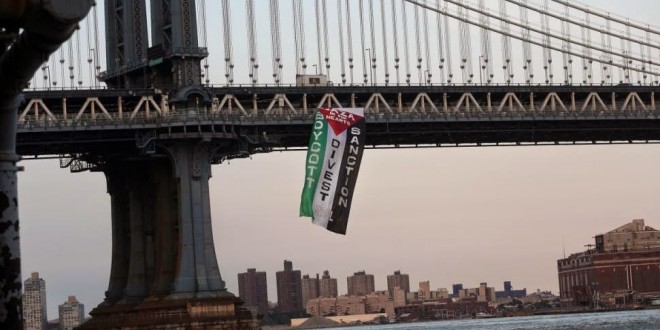 A giant flag soliciting support for Palestinians in Gaza was unfurled from the Manhattan Bridge Wednesday — a second apparent breach of security in a month on an East River span. The banner boasting the colors of the Palestinian flag was hung about dusk from the south edge of the bridge close to the Manhattan side tower. Writing on the red, green, white and black flag read “Boycott,” “Divest” and “Sanction.” The flag also bore the words “GAZA IN OUR HEARTS.” Cops immediately removed the flag and were investigating to determine who displayed it. No arrests were reported. The flag was unfurled as about 500 pro-Palestinian protesters marched across the Brooklyn Bridge into Manhattan. The Brooklyn Bridge demonstration was organized via social media by New York Solidarity with Palestine and Direct Action.

City and federal agencies continue to get flack about last month’s white flag stunt on the Brooklyn Bridge.