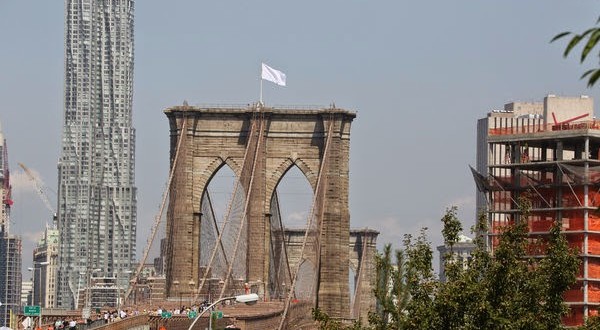 Three weeks ago New York City woke up to see that the massive American flags that fly atop each of the towers of the allegedly highly-guarded Brooklyn Bridge had been replaced by white flags. Multiple city and federal agencies investigated and yesterday a pair of German artists claimed credit for the stunt. Via the New York Times:

When the flags appeared, rumors flapped: It was a prank or a grave security breach. But the artists, Mischa Leinkauf and Matthias Wermke, say the flags — with hand-stitched stars and stripes, all white — had nothing to do with terrorism. In a series of phone interviews, they explained that they only wanted to celebrate “the beauty of public space” and the great American bridge whose German-born engineer, John Roebling, died in 1869 on July 22, the day the white flags appeared. The artists decided recently to explain themselves, and provided slightly cryptic pictures and videos of the flags, seemingly shot at night from atop the bridge. They point to other such projects they’ve done in far-flung places that haven’t made waves, and they claimed to be somewhat taken aback by the reception here.

The artists says that when they removed the original flags, they were ceremonially folded per US code and will be returned to the city.