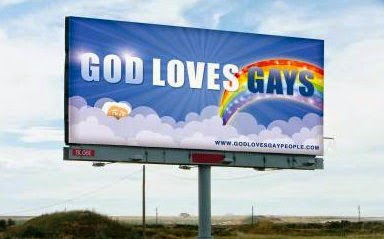 The brain behind Facebook’s popular ‘God’ humor page has crowdfunded over $40,000 in a campaign to erect pro-gay billboards in the home town of the anti-gay Westboro Baptist Church. ‘God’s’ followers pledged the funds in just ten days, and ‘God’ now plans to buy more billboards with the message that ‘God loves gays’ in other parts of the United States if he can raise further funds. Supporters will be rewarded with bumper stickers, limited edition t-shirts and posters saying ‘God loves gay’ signed by ‘God’ himself. Around 1,200 people pledged to fund the campaign with donations of between $1 and $75 for the total package of rewards. God announced yesterday that he had booked the first billboard and that it will be erected in Topeka, Kansas on 8 September.

This is a different God than the one on Twitter. The crowdfunding page is here. Below is the promo clip that went up last week.