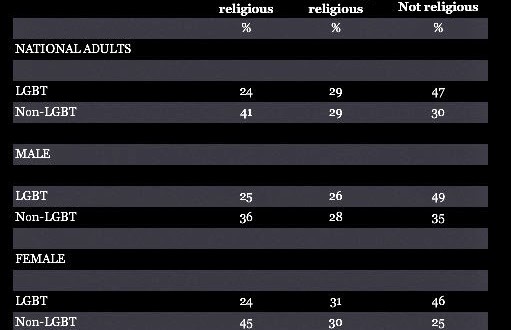 A just released Gallup poll reveals the unshocking fact that LGBT Americans tend to be less religious than the rest of the nation.

Americans who identify as lesbian, gay, bisexual, or transgender are significantly less likely than non-LGBT Americans to be highly religious, and significantly more likely to be classified as not religious. The same percentage of each group is moderately religious. These results are based on more than 104,000 Gallup Daily tracking interviews conducted between Jan. 2 and July 31, 2014, including 3,242 adults who identified themselves as lesbian, gay, bisexual, or transgender. Gallup classifies Americans as “very religious” if they say religion is an important part of their daily lives and that they attend religious services every week or almost every week. That group constituted 41% of all U.S. adults between January and July 2014. “Nonreligious” Americans (30% of U.S. adults) are those who say religion is not an important part of their daily lives and that they seldom or never attend religious services. The remaining group, 29% of Americans, are classified as “moderately religious.” These people say religion is important in their lives but that they do not attend services regularly, or that religion is not important but that they still attend services. LGBT and non-LGBT individuals differ on both dimensions that make up the religiosity classification. About a quarter of LGBT individuals attend religious services regularly, contrasted with 42% of non-LGBT individuals.

More graphs and analysis are at the link.

Previous Charles Manson To Marry
Next From The Academy Awards