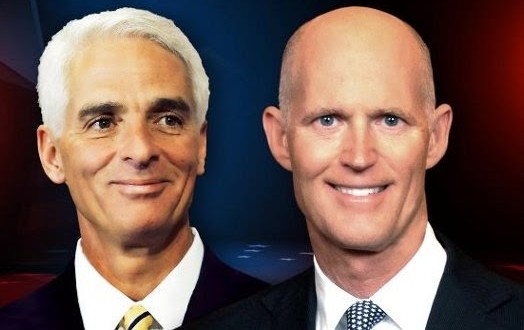 A poll released in Florida this weekend shows that Gov. Rick Scott and former Gov. Charlie Crist are now in a dead heat for the coming gubernatorial election. Crist had been leading by several points in some (but not all) earlier polls.

The poll finds both candidates have secured their respective bases. Scott gets the support of 73 percent of Republicans while only 16 percent back Crist who, before he left the party in 2010, had run for statewide office fives times as a Republican. Despite only joining the Democrats in December 2012, 72 percent of Democrats support Crist while 13 percent back Scott. Voters outside the major parties go for Scott. 40 percent to 34 percent. Scott is upside down in the poll, with 48 percent of those surveyed seeing him as unfavorable and 46 percent viewing him in a favorable light. But the governor’s job performance gets his nose above water, with 46 percent approving of it and 45 percent disapproving of it. Crist is also under water in the poll, with 46 percent seeing the former governor as favorable and 47 percent viewing him as unfavorable.

Last year Crist, a former Republican, endorsed marriage equality after having backed its constitutional ban while governor. His run for governor was endorsed last month by the Human Rights Campaign and Equality Florida.

RELATED: In the most recent poll, Florida Attorney General Pam Bondi leads her Democratic challenger, George Sheldon, by several points. Sheldon is the former Assistant Secretary for Families and Children at the US Department of Health & Human Services.