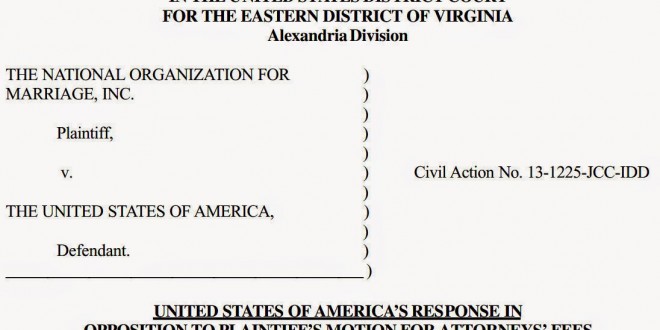 DOJ: Losing Losers At NOM Deserve No Legal Fees For Their Losing Lawsuit

The Department of Justice has issued a blisteringly scornful response to NOM’s demand for nearly $700K in attorneys’ fees for their lawsuit over the accidental release of their tax return. Enjoy:

Despite losing all the significant issues in this case and settling a damages claim of hundreds of thousands of dollars for $50,000, the National Organization for Marriage, Inc. (“NOM”) now seeks over $691,000 in attorneys’ fees. The Court should deny NOM’s motion in its entirety. The Court need not delve into NOM’s massive bills and complex algorithms to determine a reasonable attorney fee, because NOM is not the “prevailing party” — either with respect to the amount in controversy or the most significant issue pled. Regarding the amount in controversy, NOM has cherry picked the actual damages it was claiming during the course of this suit and, in fact, received less than half of what it was claiming when all amounts are properly considered. Also, NOM’s view of the most significant issue is belied by the face of its sworn Verified Complaint. Under both analyses, therefore, NOM is not a prevailing party. The Court’s analysis should end there — NOM is not entitled to any attorneys’ fees.

But even assuming, arguendo, that the Court were to determine that (a) NOM was the prevailing party, and (b) the United States was not substantially justified in defending this suit, NOM’s fee request is deficient in several respects. First, NOM incorrectly uses the Vienna Metro Matrix to determine a reasonable hourly fee for its seven timekeepers; federal law provides for a statutory cap on an attorneys’ hourly rate in such suits against the government. Second, the very request for over $691,000 in fees in order to collect a $50,000 settlement is facially unreasonable. There are also other deficiencies in NOM’s request, including the fact that counsel spent over a year preparing for, researching and drafting its Verified Complaint. Thus, if the Court were to even reach the issue of whether NOM’s fee request is reasonable, which it should not, the Court should significantly reduce NOM’s request and award it minimal fees.

Equality Case Files has the filing.