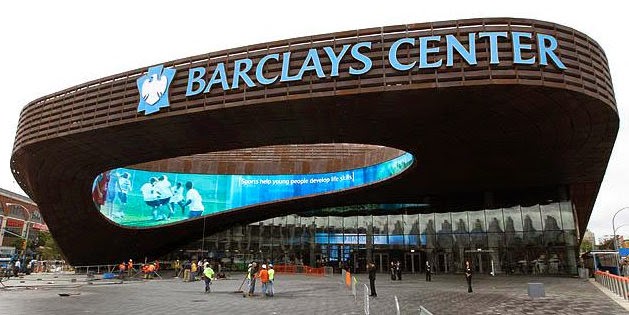 While no one puts on a show like New York, and hometowner Hillary Clinton may be the party’s nominee, many top Democrats say it makes more sense to gather in Philadelphia or Columbus, Ohio — the two cities bidding for the convention that are in swing states. “I see no reason why the Democrats would benefit from having it here,” a party official told The News ahead Monday’s visit by the Democratic National Committee’s site-selection committee to evaluate de Blasio’s Brooklyn-centric bid. “It doesn’t get you anything. Why not have it in a swing state — especially if Hillary is the nominee? It’s like shoving New York down everybody’s throats,” the source added. “We’re wonderful, but we’re not the most popular people in the world for the rest of the country.” The other two cities still in the running, Birmingham, Ala., and Phoenix, have drawbacks that make their bids long shots, Democrats say.

While Barclays is almost brand new and has facilities that are said to be better than the 2012 DNC venue in Charlotte, Brooklyn has but a fraction of the nearly 18,000 hotel rooms needed for the convention.  Some Democrats are complaining about the time they would spend shuttling between midtown Manhattan and the arena. That makes me laugh, as in 2012 the DNC assigned me to a hotel in South Carolina.

RELATED: On Friday the Republican National Committee unanimously selected Cleveland as its 2016 host city, setting up the possibility that both conventions will be in Ohio.