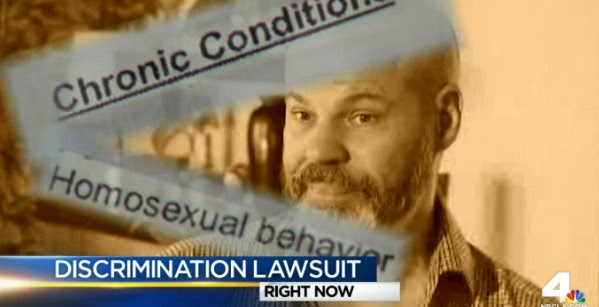 A Los Angeles gay man has filed a lawsuit after discovering that his medical records list him as having the “chronic problem” of homosexuality.

Matthew Moore, 46, who is openly gay, said he was shocked to see his sexual orientation still described as a chronic condition more than a year after he complained about the use of the archaic medical classification. “It was infuriating. It was painful,” he said of his decision to sue. “It was another attempt by this doctor and this medical group to impose their agenda of discrimination and hate onto a gay patient.” As reported in September by NBC4, Moore discovered the description in his medical records after undergoing a routine physical in April 2013 by Dr. Elaine Jones of the Torrance Health Association. Moore wrote a letter complaining about the designation to the Torrance Memorial Health Association and received a prompt apology:

“We would like to unequivocally state that the Torrance Memorial Physician Network does not view homosexuality as a disease or a chronic condition, and we do not endorse or approve of the use of Code 302.0 as a diagnosis for homosexuality,” Torrance Health Association Senior Director Heidi Assigal wrote to Moore. The association also issued a media statement saying the designation had been used as a result of “human error” and claiming that “upon notification by the patient the record was corrected.” Moore said he let the issue go, thinking the problem had been solved. But when he obtained a copy of his medical records in May, he said he was stunned to see that while the 302.0 code had been removed, “homosexual behavior” was still listed under “chronic problems.”

Moore is suing both his former physician and Torrence Memorial. Referring to the incidence of suicide among LGBT youth, Moore told the local NBC affiliate, “I don’t want any gay, lesbian, transgender or bisexual ever to hear from a doctor that their normal and healthy sexuality is anything other than that.” (Tipped by JMG reader Jerald)

Previous ISRAEL: “Law Of Return” Citizenship Granted To Non-Jewish Gay Spouses
Next Barber: Gay Marriage Is The “Gateway Drug” To Christians Being Beheaded