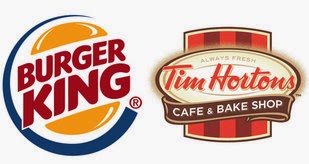 Burger King has announced that it will move its headquarters to Canada in an $11B merger with the Tim Hortons donut chain.

The new global company will be headquartered in Canada, but each brand will be managed independently, with Burger King retaining its U.S. offices in Miami, the two companies said in a joint statement. The new base in Canada could allow Burger King to reduce its U.S. tax bill — a recent report by KPMG found that total tax costs in Canada are about 46% lower than in the U.S. These so-called inversions allow companies to transfer money earned outside the U.S. to the parent company without paying additional U.S. taxes. As more companies have used inversions, President Obama and Congress have publicly criticized the moves because it cuts into U.S. tax revenue.

The merger will vault BK over Subway as the world’s third-largest fast food conglomerate with $23B in combined sales. There’s no word on whether Tim Hortons will ever get that apostrophe.

Previous Tweet Of The Day
Next TRAILER: Holy Ghost