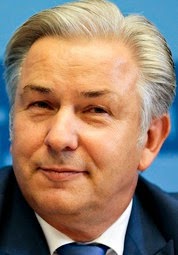 For years, Wowereit had enjoyed popularity far beyond the capital’s borders, not least thanks to a deft turn of phrase and considerable fearlessness in the face of the tabloid media. “I’m gay and that’s OK,” he casually remarked in the runup to his election in 2001, becoming the first high-profile German politician to declare his homosexuality. Another snappy phrase, his 2003 description of Berlin as “poor but sexy”, summed up his achievement in reinventing the formerly divided city as Europe’s capital of cool, helping to attract tourists and investors from across the globe. On Tuesday, Wowereit said at the press conference called to announce his departure that he was leaving in response to increased speculation about his future from within his own Social Democratic party ranks. He said he had originally wanted to announce his intention in June, “but then we won the World Cup”. He is to leave office on 11 December.

Previous Lady Gaga And Tony Bennett:
I Can’t Give You Anything But Love
Next AUSTRALIA: Homeless World Congress Of Families Convention Is In “Chaos”